If you ever find yourself in the beautiful land of Peru, you will invariably encounter Chicha Morada, a drink found throughout the land. And as the initial amazement wears off, you will start to wonder exactly what this deeply purple concoction is. And, after trying a couple of glasses, you might wonder how you can make this drink yourself?

Chicha Morada is a traditional beverage that originated from the Andean regions of Peru. The drink is made by boiling purple corn in water along with pineapple rind, pieces of quince, cinnamon, and cloves. Additionally, ingredients like lime juice, sugar, apples, etc. are occasionally used.

In this article, we are going to take a dive into one of the classical drinks from South America. We will discuss its taste, appearance, preparation, nutrition, popularity, variation, etc. And at the end, we will show you how you can replicate this classic Peruvian drink in your home.

What Is Chicha Morada?

The term “Chicha” can refer to a number of alcoholic and non-alcoholic drinks that originated in the hilly region of Andes and Amazonia. Most of these drinks are based on some species of corn native to that region.

Historians have traced the roots of this drink thousands of years back, to the pre-Columbian era, even before the establishment of the Inca empire. And it has lasted throughout the years to become one of Peru’s signature beverages, rivaling the likes of Coca-Cola in terms of consumption.

Why Is the Color of Chicha Morada so Purple?

The drink has a very distinct, deeply purple complexion. This color separates it from many other Chicha drinks, which have a more golden color. And the reason behind it is its main ingredient, purple corn.

As the name suggests, purple corn or purple maize has a very deep purple color, almost bordering on black. The chemicals responsible for this coloration are anthocyanins. This is a group of pigments that induce various colors such as red, purple, and even black. And many of the members of this group are present in purple corn, especially the chrysanthemin.

So, when you boil the maize in water, the pigments dissolve and produce a deeply strained liquid. Depending on how long you boil for, the depth of the color is going to vary.

Of course, the color of the drink will depend on other ingredients you add to it. For example, if you make the drink with things such as strawberries or apples, some of the colors of those fruits will also mix with purple.

What Is Chicha Morada Traditionally Made With?

Traditionally, you make Chicha Morada with purple corn, pineapple rinds, cinnamon, and cloves. Additional ingredients often include lemon or lime juice, quince, etc. Once the boiling is complete, you allow the drink to cool. Afterward, you mix in sugar or “chancaca” (Peruvian sauce made from sugarcane) to the drink to give it some sweetness.

Chicha Morada has a slightly sweet, slightly spicy taste with a nutty aftertaste. The sweetness of Chicha Morada is not overbearing or even particularly strong.

Despite not having any alcohol, the drink has a notable kick due to the spices. So, it has a nice balance between sweet and spicy that can appeal to a wide range of people.

Of course, the exact flavor is going to vary depending on the preparation. If you add things such as cherry or crisp pear apples, there will be a bit more sweetness with a touch of tang. Moreover, you can increase the acidity of the drink by mixing more lemon juice in it. You can add more sugar to make the drink sweeter.

Some have compared the drink to taste like a grape Kool-Aid. Others have described it as tasting similar to mulled wine, just without the alcohol.

As for the texture, the drink has a very smooth and silky feel. It goes down very nicely and it leaves a pleasant aftertaste. This drink is perfect for gulping down quinoa or any dry food. You can add a bit of crunch to the texture by putting in sliced cubes of apples.

How to Drink Chicha Morada?

Typically, you serve Chicha Morada with a long, vertical glass as a refreshing beverage. Due to its sweet and spicy nature, it is a particularly enjoyable drink during the summertime. So, most often, you will see a drink being served with ice. But you can also serve the drink warm if that is your preference.

Alternatively, you can serve Chicha Morada in a wine glass for a cocktail party. You can put shaved ice in the drink to keep it cool. Some people will put a wedge of lemon on the side of the glass. This drink will usually accompany some sort of dry food.

What Are the Benefits of Drinking Chicha Morada?

Over the years, researchers have found many links between this species of corn and good human health. And while we still need more research for conclusive evidence, the early signs are largely positive. So, here are some of the benefits that can arise from drinking Chicha Morada.

Arguably the biggest factor responsible for purple corn’s health benefits, this vegetable is very rich in antioxidants. In particular, it contains anthocyanins, which is also the substance responsible for giving purple corn its color.

Our body needs antioxidants to protect against various damaging factors such as free radicals and peroxides. These harmful molecules are produced in your body as a byproduct of various biological processes. And antioxidants are some of the helpful molecules our body utilizes to combat the dangerous molecules.

This has many potential benefits such as protecting against inflammation, stress, etc. It can improve the health of your heart, brain, liver, as well many other important organs. [1]

So, when you make Chicha Morada with corn, the pigments dissolve in the liquid. This drink is an excellent way to enjoy purple corn.

According to an issue published in 2007 by “The Journal of Nutritional Science and Vitaminology”, the pigments found in purple corn can reduce blood pressure levels. This is good for your health as continuous high blood pressure can lead to various issues in the liver, heart, and brain.

Kidneys are your body’s main organ for excreting toxic substances. So, maintaining its health is paramount for a sound body. And, according to research done by Hallym University in Korea, the antioxidants found in purple corn can maintain a healthy condition of the blood vessels in the kidneys. Thus, preserving the normal functions of the kidney.

May Protect Against Certain Types of Cancer

Cancer is a wide range of diseased conditions that can affect your body. And one of the main causes for the start of this process is commonly attributed to free radicals and the damage they cause to the cells.

So, the antioxidants in this drink can help in combating certain types of cancer by improving the immune system.

May Help Against Diabetes

According to the USDA, one of the many potential benefits of purple corn is its usefulness against diabetes. Diabetes is quickly rising to become one of the most common diseases in the world. So, regularly drinking Chicha Morada may help your chances of fighting against it. [2]

According to research conducted by the USDA, the chemicals you receive from drinking Chicha Morada (specifically the purple corn) can improve cardiovascular health in individuals. Cardiovascular health refers to the condition of the human heart and all of the blood vessels present throughout the body.

Is Chicha an Alcoholic Drink?

Chicha Morada is not an alcoholic drink. While many other similar drinks are alcoholic and made by fermenting corn in some sort of enzyme, the Chicha Morada is notably different. There is no fermentation involved at all. Nor is it a necessity to add alcohol to this mix. You simply boil the corn and mix non-alcoholic ingredients.

Of course, you can make the drink alcoholic if you wish to do so. You can add your choice of alcohol to the finished product and turn it into a type of cocktail for a party. But for people who prefer to avoid alcohol in their drinks, the Chicha Morada is perfectly suited for consumption.

Historians have traced the roots of this drink thousands of years back, to the pre-Columbian era, even before the establishment of the Inca empire. Some archeological evidence suggests that the Incan empire enjoyed this drink or a primitive version of it in 3000-2500 BC.

The drink is a celebration of the local ingredients indigenous to the land (namely purple corn and pineapple) and the culture of the people inhabiting it. After the arrival of the Spanish in the 16th century, various spices became a part of the preparation.

How to Make Chicha Morada?

You will need the following ingredients – 1 lb or 450 grams of purple corn on the cob, 4 liters of water, 1 large stick of cinnamon, 6 cloves, ½ cup of sugar (or more to your taste), 3 crisp pear or green apples, 3-4 key limes, and 1 whole pineapple.

Peel the pineapple skin apart and keep it separately. Then slice the pineapple into small cubes. Rinse the corn properly to get rid of any dirt.

Take a large bowl and place it over high heat. Put the dried corn, pineapple peel, cinnamon stick, and cloves into the bowl with 4 liters of water. Once the water comes to a boil, reduce the heat to medium-high. Keep the mixture in this state for about 50 minutes to an hour. The reduction will start to absorb the flavors.

Remove the pot from the heat and allow it to cool down. Then pour the drink into a large enough container through a strainer. You can use the remaining solids to make another batch of the drink.

Add sugar to the brew and stir until all of it dissolves. If you are planning to drink it later, then do not mix in the sugar yet. Instead, transfer the container to a fridge and allow it to cool down. This drink is best enjoyed as cool refreshment.

Just before serving the drink, slice the apples and pineapple into small cubes and add them to the brew. Squeeze the lime juice into the mixture and give it a nice stir. Taste to see if the sweetness suits your taste. Pour the drink into glasses and serve it with a straw if you like.

How Long Does Chicha Morada Last?

You can make this drink beforehand to prepare for a party or you can store it in the fridge if you have any leftovers. Normally, Chicha Morada will last 2-4 days in the fridge, provided that you have not added any sugar or lime to it. Adding sugar will start the fermentation process and quickly ruin the drink.

So, if you are planning on enjoying this drinking water, do not add any sugar, lemon juice, or sliced fruit. Because the fruit will get stale if it stays in the liquid for too long. Add those ingredients right before you are about to serve.

Once you have added the sugar, you should try to consume the drink within a few hours. The drink will not turn unsafe necessarily after that period. But the taste of the drink will severely downgrade the longer you wait.

To sum up, Chicha Morada is a perfect drink for the summertime, a refreshing mixture of sweet and spicy flavors. And if you can gather the ingredients, you do not have to travel to Peru to enjoy this drink. 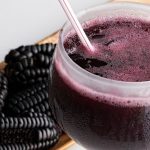 Keep Chicha Morada in the refrigerator for no more than 3 days.

Laura is the owner of Julie's Cafe Bakery. She started this blog with her grandma Julie who introduced her to the amazing world of cooking. She likes to experiment with different flavors, and her favorite flavors combo is chicken with coconut milk, curry and peanuts!
Scroll to Top