Although very similar, waffle and pancake mixes aren’t entirely the same. They contain the same ingredients, but the most significant difference is that waffles are fattier than pancakes. While pancakes are soft and smooth on the outside and fluffy on the inside, waffles are harder on the outside and soft on the inside. So, how can you make chocolate waffles with pancake mix?

You can make chocolate waffles with pancake mix, but you need to adjust the quantity of the ingredients. To get waffles, you can differentiate a pancake mix by a tablespoon of oil or butter or one or two eggs. Also, the waffles require more sugar in the mix than pancakes and, of course, cocoa powder to make them chocolate.

When I have two sets of guests arriving, the ones who prefer pancakes and those who prefer waffles, I find it very time-consuming to make two different batters. Also, it is cheaper to buy one mix for both purposes. Therefore, in the following text, I will share some of the hacks I’ve learned on making chocolate waffles with pancakes mix, how they differ, and what to put on chocolate waffles.

How to Make Chocolate Waffles With Pancake Mix?

While pancake mixes require adding milk, eggs, baking powder, and sugar to make waffles, the mix should be fattier. Since the surface of the waffles needs to be caramelized so that they get that crunchiness on the outside, waffle mixes need more sugar too.

The waffle batter isn’t supposed to be as runny as the pancakes batter. Adding butter/vegetable oil will increase the fat content of the pancakes mix and contribute to the waffles’ soft and fluffy interior. Also, the butter will help you homogenize and thicken the entire batter.

The outside of the waffles is supposed to be crunchy and caramelized. The only way you can achieve this is by adding enough sugar. The pancakes mix doesn’t contain as much sugar as the pancakes would be sticky, which they shouldn’t be, and they will be hard to flip.

On the other hand, the waffles’ surface needs to be harder and crunchier, which the added sugar will do.

Separate the whites from the yolks and mix them separately. Add them to the pancake mix and mix until the mixture homogenizes. The eggs will bond perfectly with the butter and sugar and will significantly increase the fat content of the mix, making it the perfect waffle mix.

Adding full-fat milk or buttermilk will significantly alter the pancake mix and direct it toward the waffle side. The milk will also contribute to the waffles’ fluffy interior and make them creamier.

To make chocolate waffles, you naturally need to add cocoa powder to the batter. Because cocoa can be a bit bitter, add little by little. Start with a teaspoon and try the batter after each addition.

It isn’t only essential to add the ingredients, but the order in which you add them plays a vital role in repurposing the pancake mix to waffle mix.

As I already mentioned, separate the whites from the yolks and mix them separately. Mix whites until they are foamy. Add the sugar to the yolks, and remix them in a bigger bowl.

Once the mixture homogenizes, add the melted butter/vegetable oil and the cocoa powder. Mix again with a mixer and add the milk/buttermilk while mixing.

In the end, use a wooden spoon and slowly stir in the foamy whites.

Each pancake mix has the quantities of additional ingredients on the back of the box. See how much you need of each and add one or half more. If the box says eggs, you add one more. If it says a cup of milk, you add half.

How Is Waffle Mix Different than Pancake Mix?

Waffle mix is fattier than pancakes mix, and it contains more sugar. Pancakes are supposed to be smooth on the outside and fluffy on the inside, and they also need to be more elastic than waffles, as you need to flip them.

On the other hand, the surface of the waffles needs to caramelize by the time they cook all the way through. That’s why they need more sugar because sugar caramelizes when cooked. Waffles also need more fat because their interior will burn until the sugar caramelizes if they are less fatty.

Therefore if you use unaltered pancakes mix to make waffles, they will turn out either burnt on the inside and hard on the outside or undercooked altogether.

What to Put on Chocolate Waffles?

The selection of ingredients with which to pair your chocolate waffles is vast. Try combining them with chocolate shavings on top of whipped cream. Pour melted chocolate on the waffles, and you have a chocolate bomb.

Strawberries, melted chocolate, and whipped cream are an excellent combination for chocolate waffles. Crushed nuts, almonds, and hazelnuts mixed with melted chocolate and orange are also an amazingly delicious idea.

Honey, orange slices, and dried fruit are excellent solutions if you are in the mood for something oriental and elegant.

Feel free to mix and match and experiment with other ingredients you like to enrich your tasty chocolate waffles. 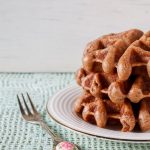 Laura is the owner of Julie's Cafe Bakery. She started this blog with her grandma Julie who introduced her to the amazing world of cooking. She likes to experiment with different flavors, and her favorite flavors combo is chicken with coconut milk, curry and peanuts!
Scroll to Top